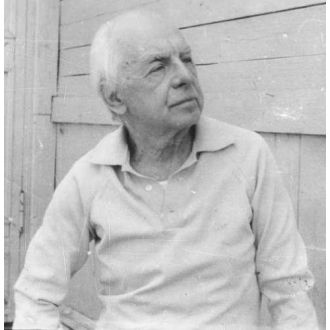 Roman Filippovich Zhitkov was born in Moscow, his father a graphical artist and advertising designer. Before WW1, the young Zhitkov studied at the Sytin Art College where his teachers were many well-known Russian artists, including Gerasimov, Pavlov and Rodionov.

Between the years 1922 to 1926 he worked in the art studio of Kardovsky - one of the most famous drawing masters in Russia. From 1931, Roman Zhitkov started his activity in the publishing houses of Moscow and St. Petersburg. In 1942 he joined the Red Army, and he made a large series of drawings and sketches from the day-to-day life at the front. From 1943 he worked in the Grekov Studio of War Artists.

Just after the end of the blockade of Leningrad, the artist was sent to the Leningrad suburb of Peterhof to make a series of sketches of the ruins. In spite of the depressing background, Zhitkov succeeded in expressing the noble harmony of lines and colours of this impressive architectural ensemble in his drawings, watercolours and lithographs.

Roman Filippovich's official work life in the 1950's and 1960's concentrated around stamps and book illustrations. He drew around 200 stamps in the 1950's, many of which are among the most outstanding of the period. His brilliant interpretations of Russian classical architecture are used as illustrations in such books as "Moscow in Russian Poetry", "Moscow Parks and Gardens", and "Moscow Architecture".

In his "personal" art-life during those years Zhitkov concentrated on his favourite topic, the Russian landscape. His subtle watercolours and gouaches demonstrate the mastery of detail and craftsmanship of their author. His lyrical landscapes portrait his state of mind at the moment of painting. Each work has a unique mood, depicted in every gradation of colour and even in the chosen composition.

In his later years he developed an interest in still-lifes, and painted many works in the best tradition of the Russian classical artists, depicting flowers and every-day objects.