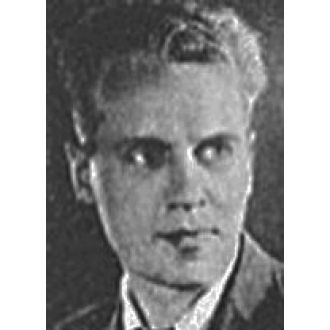 Born in Moscow, Soviet poster artist Viktor Ivanov was an honored Artist of the RSFSR (1955) and Corresponding Member of the USSR Academy of Arts (1958). A recognized master of political posters, he worked as a painter and artist of cinema. In 1929 he graduated from the Moscow State Technical College of Fine Arts, where he was trained at the Studio of D. Kardovsky. The same year he entered the Institute of Painting, Sculpture and Architecture of the Russian Academy of Arts in Leningrad, from which he graduated in 1933. While a student, he began working as a poster artist of Izogiz. In 1930 he worked as a film artist at the “Mosfilm”. Since 1934, he became a permanent participant of all-Russian, all-Union and international exhibitions.

in 1946 and 1949 Viktor Ivanov became a winner of the USSR State Prize for the series of posters. Besides, in 1948 he got ten honorary diplomas at the International Poster Exhibition in Vienna. Also, in 1964 – Silver Medal of the USSR Academy of Arts, in 1967 Gold Medal of the USSR Academy of Arts for a series of posters. Viktor Ivanov was the author of the book “How to Make a Poster”, Moscow, 1963, and a number of articles about the Soviet political poster and art in cinema. And already in 1970 he got a Special Award, posthumously, for the posters at the All-Union competition of political posters on the 100th anniversary of Lenin’s birth.

Working in the “Windows of TASS” (1941-1943) he created a series of posters, including those dedicated to Lenin and the struggle for peace, which were characterized by journalistic passion, concrete theme. Viktor Ivanov also worked in the field of easel painting and cinema design.