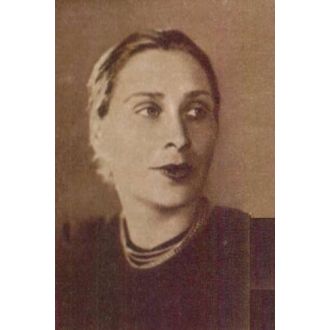 Vera Matveevna Livanova was born in Moscow. Her mother was Natalia Valeryavnovna Lyubavskaya (born Zyzykina), and her father was Matvey Kuzmich Lyubavsky - historian, professor and chancellor at the Moscow State University before the Revolution. In 1930 she graduated from the Theater Design department of the Vkhuteinn art institute - among her teachers were three icons of pre-war Soviet art, Gennady Gerasimov, Lev Bruni and Piotr Konchalovsky. Her style as a poster artist was shaped under the guidance of well-known masters of early Soviet art Aleksandr Deineka, Yuri Pimenov and Vladimir Tatlin.

Vera Matveevna started her career as a professional artist in Perm doing theater designs. After two years in Perm she moved to Kiev where she started working as a poster artist. In 1936 Vera Livanova settled down in Moscow and in 1938 she became a member of the Moscow Union of Artists. Being very productive, from 1937 to 1968 Vera Livanova worked as a poster artist for the “Izogiz” and “Soviet Artist” publishing houses. In the period from 1958 to 1968 she carried out commissions for “Agitplakat”. At the beginning of her career with “Izogiz”, Livanova’s posters focused on topics related to the rise of agricultural and industrial standards under the Soviet regime. Common topics were those connected with elections, anniversaries and other political events celebrated by the Soviet ideology. Her posters show her mastery as a colourist, not being afraid of innovative colour solutions.

During World War II Vera Livanova’s work focused on mass propaganda themes. The first poster announcing the defeat of fascist Germany was created by her. After the war Livanova turned to the concept of post-war reconstruction of Soviet agriculture. She also published posters dealing with elections, with titles such as “Elections to the Supreme Soviet of the USSR” and “The Constitution of the USSR”.Livanova’s posters of the fifties demonstrate the artist’s fascination with the traditional Russian “lubok”. Her series of posters dedicated to Moscow’s 800th anniversary depict a composition and a range of colours very much alike the style of popular lubok images. The sixties focused on international themes. Slogans such as “Freedom to Africa!”, “May. Peace. Labour!”, “Peace and Happiness for the World!” are typical of that period.

Through her career Vera Livanova traveled extensively in the Soviet Union - all documented in her masterful pencil drawings and gouaches. Destinations were Khosta in 1957, Gurzuf and the Crimea in the 1960s, and the developing Siberia of the1960s - Divnogorsk, the Enisei river, and the construction of the Krasnoyarsk hydro power plant in Dudinka.Vera Livanova and her husband German Livanov, architect and theater director, provided a significant artistic inspiration for their daughter Tatyana, and Vera Matveevna designed several posters together with her daughter.