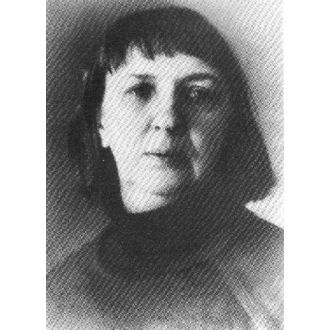 Svetlana Georgievna Ryazanova was born in Izhevsk. She studied at MIPIDI - Institute of Monumental Art - in Moscow in the early 1950s, where her teachers were Popov, Smirnov and Godlevsky.

Upon graduation in 1955 she worked for different Moscow publishing houses, mostly for Izogiz, designing and drawing postcards and posters. She drew some of the most well-known and popular postcards of that period. Her themes were International Women's Day, 1st of May, New Year, children and skating. Her watercolours of this period are bright and optimistic.

In the 1960's she travelled and painted extensively in the Southern republics of the Soviet Union and on the Black Sea. She painted the Black Sea in a series of small impressionistic oils, depicting fishermen and beach-life, as well as a series of the vineyards of the South in warm oils and watercolours. Ryazanova's fondness of the sea can be perceived in her series of oils and watercolours from the Baltic Sea and Klaipeda in particular.

From the late 1960's she concentrated on her other passion as an artist: Works in glass. She has made mosaics, sculptures, applied art and large monumental works over the years, and has been awarded several prizes for her works.

Svetlana Georgievna belonged to a family dynasty of artists. Her husband Vadim Volikov was a famous poster artist in the political genre in the 1960's and 1970's. Her daughter Natalia Volikova works with art in glass, too, and so does her grandson.
BACK Share