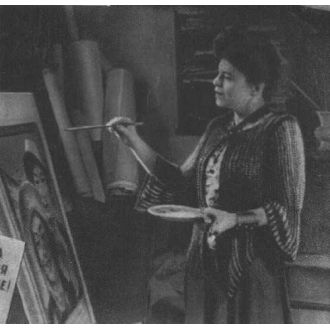 Galina Konstantinovna Shubina was born in Voronezh. From the age of 13 she studied in in the watercolour class at the local art school. She was particularly enchanted by the art of Bakst. During her summer holidays she would spend long hours in her private studio - the garret of a big barn – drawing and modeling figures in red clay.

She moved to Leningrad to study sculpture, but after two years in the faculty of sculpture at the Leningrad Academy of Arts, she transferred to the Academy’s graphics faculty. Here she studied under the prominent artists Mitrokhin and Kruglikova specializing in posters. Other teachers were Konashevich, Radlov, Shillingskii and Petrov-Vodkin.

Thematically, her drawings of the 1920s and early 1930s revolve around the theatre; the early works were inspired by Art Noveau, and the later ones by the Russian avant-garde. Her works are often characterised by a strong sense of melancholy, and sometimes a not very subtle eroticism.

After graduating from the Academy Galina moved to Moscow in the late 1920’s, where she began to work in the field of political posters and portraits. She was particularly inspired by Deineka. Her posters of the early 1930s and the pre-war years are all bright and optimistic.

Galina’s husband Soslanbek Tavasiev was a famous sculptor, her daughter Galina Dmitrieva is a well-known graphic artist in Moscow, and her granddaughter Anastasia Dmitrieva is also an artist.
BACK Share