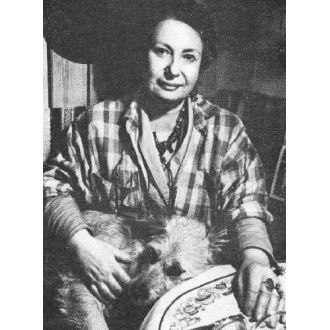 Galina Soslanbekovna Dmitrieva was born in Moscow in a family of artists. Her father was the famous sculptor Tarasiev, and her mother Galina Shubina was a highly esteemed poster artists in the 1920's and 1930's. Galina's husband Dmitry Dmitriev was a graphics artist.

In 1949 she entered the Surikov Institute in Moscow, where her professors were Dobrov and Matorov. She specialised in posters in the studio of the famous artist Mikhail Cheremnykh, who had a strong influence on her style. Here she developed her preference for the gouache media.

Upon graduation Galina immediately started working with book illustrations for different publishing houses. This is still her main activity. She has made illustrations for almost a hundred books. This includes Cinderella, The Nutcracker, The Captain's Daughter (by Pushkin) and many childrens' books and Italian folk-tales.

Since the 1950's she has been drawing the old disappearing Moscow on the boulevards around her tiny studio on Sretensky Boulevard: Ulitsa Petrovka, Rozhdestvensky Boulevard, Petrovsky Boulevard and Sretensky Boulevard. These drawings are all in the style of Moscow impressionism, with a clear link to the old master Mikhail Cheremnykh.

In the 1980's she painted a large series of paintings depicting Moscow girls and young women, including her fellow artists and characters found on the boulevards of Moscow.

In her later years, Galina painted the daily life of the Muscovites. She developed her own, characteristic style in portraits, almost non-figurative and with a bold composition and strong colours.
BACK Share