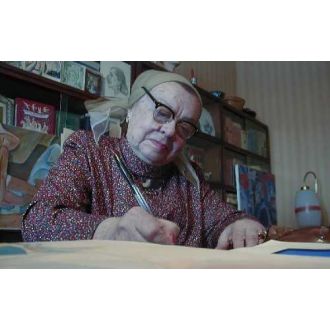 Marina Evgenevna Uspenskaya was born in Moscow. She graduated from the 1905 Art College, where she studied theatre and decorative arts under professor V.A. Shestakov. In 1947 she entered the Surikov Institute in Moscow, specialising in drawing. She studied under professor Dekhtyaryev in the book illustration studio.

Soon after graduation she found her passion and craft: Illustrations for childrens’ books. Throughout her career, she made illustrations for some 200 childrens’ books in the Soviet Union, Czechoslovakia, Russia, France, India and Japan. She worked for several of the largest publishing houses in her native country, including Detskaya Literatura, Detgiz and Malysh. In total, her illustrations have been printed in more than 115 million books and postcards.

Marina Evgenevna is famous for her illustrations for classic Russian fairytales, including Ruslan and Lyudmila. It was her graduation work at the Surikov Institute, and during her career she returned to the theme many times. Marina Evgenevna was one of the anchor artists on the famous childrens’ journal Murzilka from 1956 to the late 1960s.

Applying watercolour, indian ink and gouache in warm and gentle colours, she saw daily life through the eyes of a child. Her illustrations are detailed, yet with a simple and very light touch, and she showed the joy of being a child, even in an adult world that you do not always understand.

Her “private” art focused on lyrical landscapes and still-lives, and she painted many colourful and bright landscapes in gouache from the regions around Moscow, mainly from Tarusa, where her dacha held a special place in her heart. She also painted many oils and gouaches of her local Moscow neighbourhood around Kievskaya and Dorogomilovskaya.

Marina Evgenevna continued the tradition of her grandfather Vasilii Navozov, artist and academy member, and for many years her life was connected to famous Moscow artist and academician Boris Uspensky

Her art changed over time, but always in her very personal and highly recognisable style. From the late 1960s onwards she moved away from her classical realism into a more expressionistic and symbolic world. From the late 1980s she watched, and was inspired by, the changes in everyday life happening in the transition from the Soviet Union to the new Russia. This was for example reflected in her colourful, often red or orange, images of the New Russian Women - as she called them – which she boldly and virtuously depicted in scenes from every-day life. Her favourite media in her later years was the colour pencil, with which she depicted daily life in Moscow, be it in the Moscow metro or evenings at the theatre or the ballet.

Marina Evgenevna was an artist of a rare magnitude. She mastered the classical skills of drawing, her touch was deft and precise, but she did not let that fact limit her creations. She stayed young in her art, developed with the times, and even her late art enjoyed a tremendous success in the Moscow art scene.