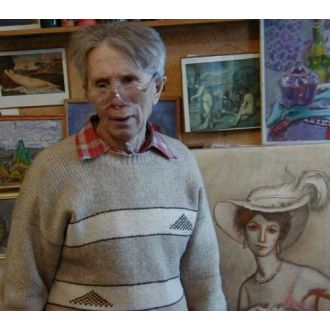 Konstantin Grigorevich Gneushev was born in Gneushevo, Orel. As a boy he went to a specialised art school. In 1938 he entered the MIPIDI, Moscow Institute of Applied and Decorative Art.

In 1941 he volunteered for the army, and served on several fronts: He was seriously injured in 1942, and he received several distinguished medals for his service.

After the war and several years of hospitalisation, he entered the Stroganov Institute, where his main teacher was the famous Pavel Kuznetsov. Other teachers were Aleksander Kuprin, Sergei Gerasimov, and Egorov.

Konstantin Grigorevich's favourite media since the 1960s is the pastel. His style is light and full of life, showing a direct link to French impressionists. That was also noted mockingly by Alexander Kuprin during a students' exhibition at the Stroganov Institute.

Gneushev was always very fond of sports. This can be observed in his numerous pastels and oils of the 1960s, depicting gymnastics, ice hockey, fencing, and swimming.

In the 1970s he was enchanted by the world of ballet and opera. In the mornings and the afternoons he would go to the theaters, most often the Stanislavsky, and paint the ballerinas and the corps de ballet during rehearsals and before the show. The circus is one of his passions.

In his vintage years, Konstantin Grigorevich is painting mainly landscapes and still-lives, all in his favourite media - pastel. In his landscapes the sun always shines.
BACK Share