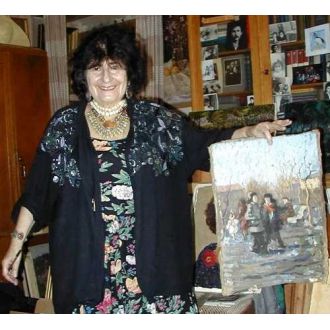 Naira Surenovna Akopyan was born in the town of Stepenakert, Nagornii Karabach in Azerbaijan. When she was two, her family moved with her to Moscow. She showed an early talent for drawing, and at fourteen she went to the Moscow Intermediate Art School at the Surikov Institute, where Sergei Mikhailov and Vasilii Bokov were amongst her teachers.

Later she studied at the Surikov Institute, where Mikhail Kurilko was her teacher. In the late 1950's she met Martiros Saryan - the famous Armenian painter - and he was until his death her personal friend and mentor.

In the late 1940's and early 1950's she painted many watercolours, depicting the daily life in post-war Moscow. After graduating at the Surikov Art Institute, her work was inspired by the classical, strongly realistic style taught at the institute.

During the 1960's, she developed her own style with a mix of the warm South and her Moscow training. In her landscapes and still-lives, she is inspired by southern colours and landscapes.

Around her, Naira had a whole dynasty of painters. Her husband, Ruben Adalyan, was a famous painter active in Yerevan, and her daughter Sona and grandson Ruben also paint.