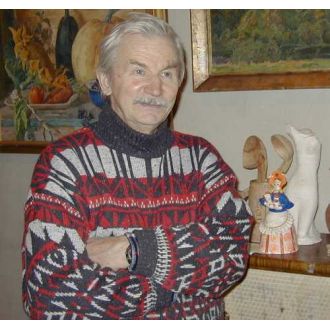 Evgeny Grigorevich Gavrilkevich was born in 1929. He started drawing at an early age, attending art school.

After graduating in the 1950's, he concentrated on watercolour portraits. In the early 1960's he painted a series of sombre socialist works, inspired by the new "Severe Style" and art icon Viktor Popkov - the so-called new face of Socialist Realism.

In the same period he travelled on the Azov Sea, creating some beautiful, colourful and light temperas from the region. In the early 1970's he painted several oils from the Russian North, including Archangelsk and Leningrad.

Evgeny Grigorevich had a masterful command of the watercolour and the tempera media. His light touch and his eye for the street scene gave him the opportunity to create unique images of daily life in Moscow. His genre scenes from the Moscow metro and Gorkii Park are typical of the period from 1975-1985.

He was well-known for his paintings of sports, in particular fencing and skiing, and for his genre scenes of the ballet and the circus.
BACK Share