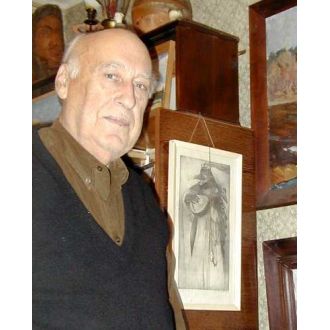 Evgeny Ivanovich Tretyakov was born in Moscow. In his early years he went to a specialized art school. In 1951 he graduated from the Moscow Surikov Institute, where he studied at the theatre-decoration section under Professor Kurilko.

During the fifties and sixties he worked as a theatre artist at the Bolshoi Theatre, at the Ermolova Theatre and at the Theatre of the Soviet Army. He gained his inspiration from masters like Yurii Pimenov and Shifrin.

From the mid 1960's he started painting landscapes, portraits and genre, applying his lively and colourful oils to the landscapes of Karelia, Rostov and Feodosia on the Black Sea. In Moscow, he depicted the cityscapes around the Yauza river, and the village Troparyova (now Yugo-Zapadnaya).

Most of his landscapes are painted in the open air, and they all have a strong impressionistic touch.

His second big passion was teaching at the Moscow School of Applied Arts, where he was highly regarded by his colleagues and by the students. He taught there from 1960.

Tretyakov was an eager hunter. He often would travel to his beloved Rostov Velikii for his favourite pastime. Many of his catches can be seen in his still-lives with game.