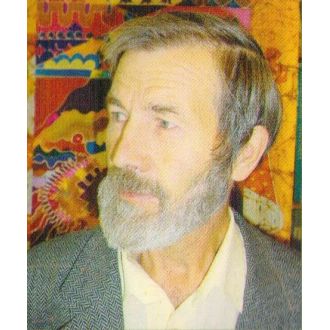 Nikolay Gerasimovich Protasov was born in the town of Baley in the Far East Chita region of Russia. From 1954 to 1959 he studied at the Irkutsk Art institute.

After graduating, he lived several years in Murmansk, worked as an artist, and also went on several long haul trips with fishing boats, all across the Atlantic ocean. During these travels, he documented nature and the life of the fishermen in gouaches and linocuts. He also depicted the daily life in the socialist city of Murmansk in his linocuts.

In 1977 he became a member of the Artists’ Union of the USSR, and in the same year he moved to Moscow.In Moscow, he worked many years for the art publishing house “The Print Workshop”, where they issued small print runs of high-quality linocuts, lithograps and etchings, all under the personal supervision of the artist. These works were the sold to the public at special outlets.

He worked for many years for the youth journal Yunost as an illustrator, creating illustrations to a large number of books, including “Live and Remember” by Valentin Rasputin and “Rain over Radinitsa” by Vyacheslav Shugaev.

Topically, he continued working with his favourite themes: The ocean, the fishermen and daily life on the boats, the Russian North. He often depicted the life of the young Soviet cities, with its youth in the parks, the skating rink in the back yard.

In 1981 he created a large series of linocuts which he named “War and Peace”. Based on stories from ancient cultures he described the fight of Good against Evil. During his travel in Mordovia he drew  - in pastel - a large series of portraits and stories, based on old Mordovian tales. Several of these drawing he also made as lithographs.In the mid 1980s he printed several series of linocuts based on Russian bylinas, and also illustrations to the old Russian epic poem “The Tale of Igor’s Campaign”.

In his personal artistic life, Nikolay Gerasimovich loved to draw portraits and still lives with everyday items - often in pastel and colour pencil.His favourite media were prints - linocut and lithography, but he also worked with mastery in gouache, watercolour and pastel.

He held eight personal exhibitions, amongst others in Irkutsk, Saransk and Moscow.
BACK Share