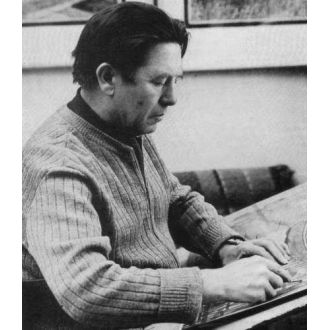 Masabikh Fatkhlislamovich Akhunov was born in the village Verkhne-Moncharova in Bashkiria. He studied at the Kazan Art Institute from 1950-1951, however he never finished his formal education. He was drafted for the army, and served there until 1958. Upon moving to Voronezh, he started his individual artistic career. He re-invented the linocut media in the 1960's, last taken seriously by the Russian/Soviet avantgarde of the 1920's.

Utilizing his masterful command of the media's technique and his creative approach to the opportunities in the media, he set new standards for artistic expression in linocut. His extremely gentle cut and multi-layer technique create an amazing feeling of light and perspective, not seen with any other graphical artist. He juxtaposes heavy industrial themes with human objects and poetic elements of nature, creating a unique atmosphere. Occasionally, he breaks the severeness of the linocut by applying gentle, pastel-like watercolours to the individual print.

From the late 1960's he created several series of prints with industrial and agricultural themes, with names like "The Industrial Rhythms of Russia", "Industries of the Black-Earth Region", "Industry in the 11th 5-Year Plan", and "The Defenders of the Fatherland". He also made a large amount of Lenin images, many of which were published as posters. Curiously, he claims to have made the last Lenin poster to be published officially, in 1989.

In his late years, he shifted to the depiction of the poetry of the Russian landscape, Russian churches and religious motives. He is now regarded as the most outstanding artist of the linocut media in Russia, constantly featured in graphic's exhibitions.
BACK Share