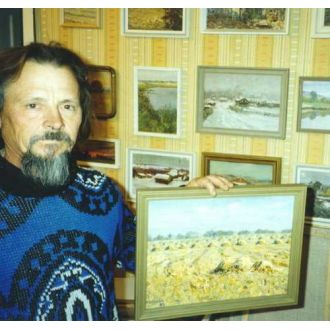 Nikolai Petrovich Schumkin was born in the village of Opytnoe in the Orenburg Oblast. From his early days he loved to draw. After finishing his studies in Orenburg, he moved to Togliatti, where he started his professional career.

His works of the 1960’s are mainly small oils, showing the Russian village and it’s people. From the end of the 1960’s and through the 1970’s he concentrated on genre works, depicting daily and socialist life in the province.

He painted a large series showing the construction and the first years of operation of the Avtovaz car plant, mainly using his masterful command of the graphite pencil, indian ink, and gouache. He also created many lithographs and linocuts during that period.

During the 1970’s he depicted the daily life of Togliatti, through a number of sketches and larger paintings, in particular using the gouache media. He would show the young mothers strolling the streets, sportsmen in action and art students. He observes the small details
of the life of the 1970’s clothing, architecture, attitude, in a way that makes us see the 1970’s as they were in Western Europe as well.

In his later years Nikolai Petrovich concentrated on oil paintings, making large canvases of his beloved Volga, and Italy, which he discovered in his later years. He was one of the most prominent artists in the Samara region.
BACK Share