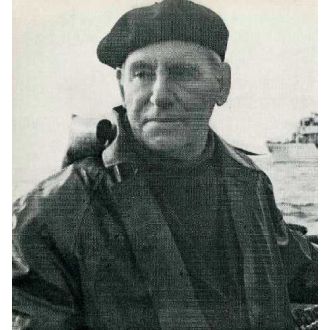 Lipa Grigorevich Rojter was born in the town of Vinnitse in a Jewish family. As a boy he was very fond of drawing, even though he never received any formal training. In 1933, he participated in an exhibition in Moscow for self-taught artists. After the exhibition, he was accepted at the Polygraphic Institute in Moscow (the later Surikov Institute), where he studied under the famous draughtsman Vladimir Favorsky, as well as Pavlinov and Istomin.

During the war, Lipa Grigorevich served in the army as a foot-soldier, however he always found time to draw what he saw. These sketches he would later use in his famous war series of linocuts that he made in the late 1950s and early 1960s

After the war he travelled extensively in Western Siberia, recording his impressions from the travels in wonderful drawings and watercolours. In 1957-59 he made 2 large series of linocuts based on his Siberian travels, called "Students at the Virgin Lands", and "Grain".

Another series of works he made from the construction of the Bratsk hydroelectrical plant, oncluding his famous triptikh "The Riches of Siberia" with the 3 parts: "Sub-Soil", "Grain" and "Energy".

Another favourite theme of his was the kolkhoz and the village life. He depicted the happy harvest time, village holidays and dances, as well as portraits of the model-farmers and workers.

In the early 1960s he made a number of coloured linocut based on Mayakovsky's poems and life. Mayakovsky was one of his favourite themes, from 1940 when he made his first book illustration to the famous modernist, and until his death.

Lipa Grigorevich was very fond of winter sports, mainly ice hockey and speedskating. This fondness he expressed in a large number of linocuts, showing both competitions and portraits of famous sportsmen.