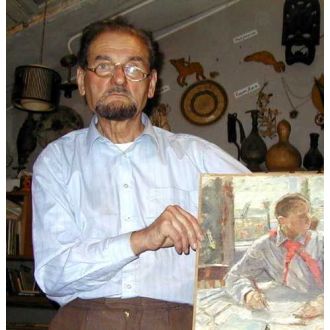 VitalyTimofeevitch Davydov was born in Melovoe, Ekaterinaslav in Ukraine. During the Second World War he served as a member of the Signal Corps, and was awarded several medals. After the war, he studied at the Surikov Institute, where his teachers were Pochitalov, Chekmazov, Kotov and Pokarzhevskii.

Before the war, the young Davydov painted the old Sokolniki in Moscow in a series of small oils. During the war, he made a large amount of drawings of the everyday life at the front, and some of the larger battles. He then sent them home to his parents, who saved them for after the war.

From the middle of the 1950's, Davydov travelled extensively in the Far East, Kamchatka, Chukotka, Baikal, and the newly discovered oil fields. He described his travels both in words and in drawings and paintings, and he has published several books about his travels. His paintings from this period are penetrated by the light of the north, and by the pale and gentle colours of the nature. In particular his oils and temperas of the sea in Baikal and Kamchatka are extraordinary.

According to Davydov himself, he has achieved three major feats in his life: "Firstly, I survived the war, walking all the way from Stalingrad to Vienna (only 3% of my 1923 generation survived). Secondly, in 1954 I was the first artist to come to Kamchatka, making it on foot all the way to the newly discovered Valley of Geysers. Thirdly, I survived a stroke in 1990, my whole right side paralyzed, and I taught myself to paint again".
BACK Share