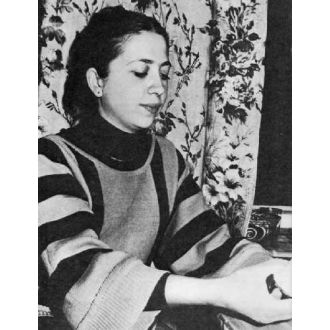 Tatyana Nikolayevna Alyoshina was born in Moscow on May 17, 1955. She was brought up among artists and architects and she took up drawing and oil painting early, first at the House of Pioneers and later at the Children Studio of the Moscow House of Architects.

The young artist was educated discussing art with those she considered her teachers, i.e. The poster artists Boris Uspensky (her uncle) and Oleg Savostyuk, the graphic artist Nikolai Voronkov and the art historian Georgy Dunayev.

In 1962 she entered art school while she also studied at a regular grammar school with specialisation in French. From 1973 to 1979 she studied at the Moscow State Art Institute named after Surikov. In 1979 she graduated with excellent marks from the graphics department. Still a student in 1975, she started participating in Moscow exhibitions and her works were shown at three all-Union exhibitions.

By December 1981, Tatyana had taken part in ten exhibitions. Her series of colour lithographs “Commedia dell’Arte” and a couple of works from the Little Hump-backed Horse series were successful and were acquired by the Union of Artists of the USSR. In 1980 she became a member of “The Union of Young Artists and Art Historians of the Soviet Union, a branch of the Union of Artists of the USSR” (объединение молодых художников и искусствоведов МОСХ РСФСР).

In December 1981 Tatiana was commuting to an Arts and Crafts House (дом творчества) on Cheljuskinskaya station in the Moscow suburban area of Mytishchi where she was supposed to complete a series of lithographs from six sketches. On December 9th 1981, on her way from work amid a terrible snow storm, while waiting for a train to pass by, Tatiana died in a tragic accident run over by another train she did not see coming from the opposite direction.

Although she died only 26 years old, Tatiana Alyoshina leaves behind an important heritage of graphic works in colour lithography and pastel that have been exhibited, receiving acclaim from both art experts and the public at large long after her death. Her feeling of colour was unique and such was as well her approach to the subject matter in her series of Tallinn inspired cityscapes, the Circus and the Commedia dell’arte colour lithographs series and the lithographs she produced for Yershov’s Russian children’s story Little Humpbacked Horse.
BACK Share