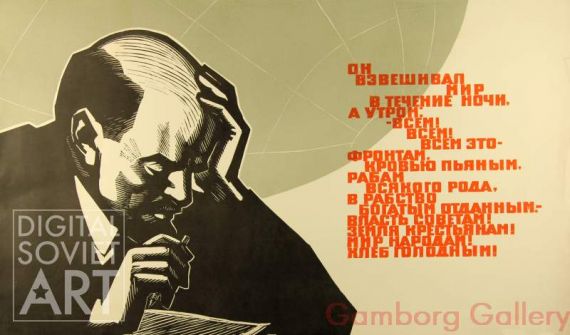 Mayakovsky's four-poem Lenin Cycle started in April 1920 with "Vladimir Ilyich!" published in the days when Vladimir Lenin's 50th birthday was celebrated all over the country. Then in 1923 came "We Do Not Believe!" (Мы не верим!), written in the wake of the news of Lenin's fatal illness. It was at that time that the idea of an epic poem on the Russian revolutionary leader was born. In the early 1924, soon after Lenin's death the poem called "The Komsomol Song" (Комсомольская) was published in Molodaya Gvardiya (Nos. 2 and 3), featuring the soon to become omnipresent refrain: "Lenin lived, Lenin lives, Lenin is to live forever.All three were later included into the 22-poem Revolution cycle.