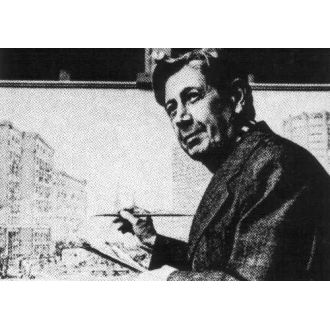 Boris Fyodorovich Rybchenkov was born in Smolensk. He studied at the Kiev Art College in the pre-revolution years. In 1920, after serving shortly in the war, he moved to Petrograd, where he studied at the Free-Art studios under Altman and Mateev.

In 1921 he moved to Moscow, where he studied at the painting section of VKhUTeMas. Here his teachers were Popova, Drevin, Shevchenko and Udaltsova.

After graduation, he was a member of several of the most influential grouping of artists, including AKhRR (Association of Artists of Revolutionary Russia), the famous satirical group ROST, and the Group of Thirteen.

In 1920, he worked in “Rost Windows of satire” on the Western Front and decorated propaganda train. He worked with amateur artists and established the Children’s Art Studio #1 of the Leningrad district of Moscow (1960-1980). Moscow remained one of the constant and favourite themes in Rybchenkov’s creative work. Rybchenkov’s Moscow is not a pompous grand city but one of small side-streets, backyards, old-houses and reminiscences about the past.

His works of the 1920's-1930's are strongly influenced by the Russian avant garde. During that period, in particular his pencil-drawings and watercolours stand out. From the mid-thirties, when the artistic freedom of the artists was challenged via the official battle against "formalism", he also suffered because of his affiliation with the Group of Thirteen. He was at a point characterized as contra-revolutionary.

His preferred motive was always the urban landscape, and from the late 1930's to the 1950's he painted several large series of Moscow and his hometown Smolensk.

From the 1960's Boris Fyodorovich returned to the traditions of Moscow impressionism, which also guided him during the years of the Group of Thirteen. With this inspiration, he painted cityscapes during late evenings and nights, and during rain.