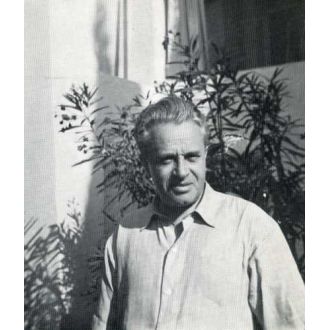 Veniamin Markovich Briskin was born in Romny, Ukraine. He studied at the Kharkov Institute of Fine Arts under S. Prokhorov and M. Sharonov, specialising in book illustrations and posters.

After moving to Moscow in 1932, he worked briefly for the famous satirical journal "Krokodil", and from 1934 to the end of his career he worked for Komsomolskaya Pravda, and from 1956 for Pravda.

During the 1930s he worked with portraits in watercolour and gouache, and produced a large series of sensual female portraits and nudes.

He illustrated a large number of books, including "In America" and "My Universities" by Maksim Gorky, and "Short Stories" by Mark Twain.

During WW2 he prepared a large number of "Agit Posters", aimed a boosting production and raising morale. He however became known mainly for his political posters of the 1950s and 1960s.

During the Cold War in the 1950s, he produced many posters on the theme of the Korean conflict, NATO and UN, as well as general anti-capitalistic themes. Particularly known was his gouache-watercolour series about the behaviour of the American occupants in Western Europe, prepared together with artist Pyotr Karachenchov.

His most popular posters was a series of about 25 posters with the common theme of building the real socialist behavior. All posters had the slogan "Не будь таким !" - (Don't Be Like Him !).

During the 1960s he prepared a number of highly graphical posters on the theme of anti-imperialism and anti-colonialism.

Many of his posters were made in partnership with famous poster artist Konstantin Ivanov, and in the late 1950s they prepared a series of theatre posters for the national stage of Tadzhikistan.
BACK Share