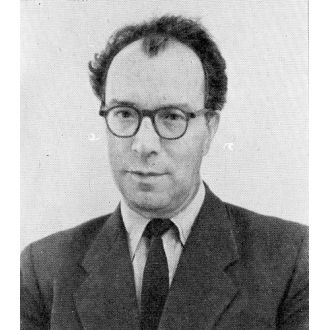 Boris Aleksandrovich Derzhavin was born in Kaluga in 1917. In 1941 he graduated from the Moscow Textile Institute, where amongst his teachers were A. Kuprin, A. Fyodorov-Davydov, and P. Paskov.

In 1940-41 he worked as design-artist on the Moscow textile manufacture Kraznaya Roza.

During WW2 he served in the Red Army on the Soviet Central Front, and was awarded a number of medals.

From 1946-1951 he worked at the Moscow Silk Manufacture named after Scherbakov, and in 1952-61 he was chief designer at the Ministry of Light Industry of the USSR.

In 1950 he became a member of the Artists’ Union of USSR. From 1966 through the 1980s he taught at the Moscow Textile Institute.

During the 1960s and 1970s he regularly visited the studio of Eliy Belyutin, who was famous in the period for his teaching of non-socialist realism methods of drawing and painting (in the period labelled as formalism). Derzhavin’s personal works of that period are often inspired by Belyutin.

His favourite media were tempera and watercolour. Boris Aleksandrovich’s works are a bright example of the artistic freedom that many former students of the Moscow Textile Institute were able to take advantage of. These artists were not educated according to, and consequently not artistically limited by, the dogmas of the Socialist Realism.

His wife, Margarita Derzhavina, was also a well-known textile designer during the 1960-1980s.
BACK Share