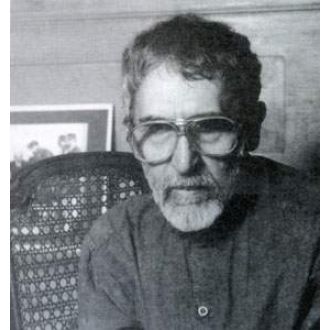 LEONID BERLIN is an outstanding nonconformist sculptor, painter and book illustrator. From 1943 to 1949 he attended A. Matveyev’s workshop at the Faculty of Sculpture, Moscow State Academic Art Institute named after Surikov, where his graduation work adviser was N. Tomsky. In 1950 he became a Fellow of the Artists’ Union.
In the 1950-s Berlin’s creative activity contributed to the formation of the “austere” style in art. In 1962 he took part in the legendary exhibition in Manège, dedicated to the 30th anniversary of Moscow Artists’ Union (MOSKh), which was visited by Khrushchev.
In the 1960-s Berlin took up working with metal, applying welding techniques, creating kinetic sculptures. The abstract forms of these grotesque and highly expressive works deviate from the Soviet canons.
In 1987 the artist took part in the exhibition called Retrospective Review. 1957-1987 which was devoted to the history of Soviet nonconformist art. In 1991 he participated in the exhibition entitled Different art. 1956-1976. Berlin’s creative work was most fully represented in his one-man show, organized at Vadim Sidur’s Moscow State Museum in 1999.
Leonid Berlin is the author of more than 20 monuments, erected in different Russian cities. He decorated four underground stations in Moscow. As a sculptor he also took part in the production of such films as The Optimistic Tragedy, Andrej Rublev, The Song of Rustam.