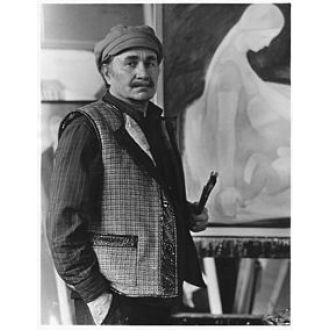 Boris Lukoshkov was born on June 20, 1922 in the village of Nyunega, currently in Shenkursky District of Arkhangelsk Oblast.

In 1940 he graduated from high school in Shenkursk; in October of the same year he was drafted into the Red Army. He was nineteen when the Great Patriotic War began. On September 13, 1941, while fighting his way out of an encirclement, in street battles in the town of Lokhvitsa, Poltava Oblast in Ukraine, he was critically wounded. He once again joined the army in the fall of 1943. In June 1944, he was wounded again. Severe injuries and their consequences considerably complicated his future activity as an artist.

In 1949 Lukoshkov was admitted to the Leningrad Art College (Tavricheskaya Art School). Upon graduation in 1954, he continued his studies at the Ilya Repin Leningrad Institute of Painting, Sculpture and Architecture (formerly the Imperial Academy of Arts), however, he decided to quit the studies after one year since he was still severely handicapped after the war. Subsequently, he returned to Shenkursk. Due to the fact that he got his education in Leningrad, Boris Lukoshkov is considered as a representative of the Leningrad School of Painting.

Between 1955 and 1957 Boris Lukoshkov worked in Shenkursk. Subsequently, he moved to Arkhangelsk to work in the workshops of the Art Fund and the North-West publishing company. In 1957 he for the first time participated in an art exhibition in Arkhangelsk. In 1965 he joined the Union of Artists of the RSFSR.

In the 1960s, there was growing interest among Soviet artists in linocut. Linocut is characterised by its brevity and dynamism, speed of execution, and decorative effect. G.A. Ryabokon, V.S. Vezhlivtsev and Lukoshkov, all Arkhangelsk artists, began to work in linocut. The subject of the earlier linocuts by Lukoshkov was associated with his hometown, Shenkursk, and neighborhoods. His linocuts are known for their strict elegance and conciseness. In the late 1960s his linocuts were highly praised and were shown at the All-Union (USSR) art exhibition in Moscow in 1967.

By the 1970s Lukoshkov preferred to work with a fine lace mesh of light, casual, or a measured rhythm of light lines in his paintings.

He died in 1989 in Arkhangelsk, and was buried in a village of Izhma, Primorsky District.
BACK Share