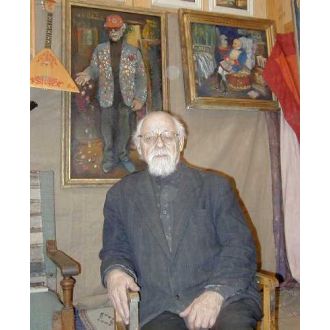 Nikolai Ivanovitch Tereshenko was born in the village Matveevka in the Orlov oblast. He went to the Moscow Art School from the middle of the 1930's, amongst his terachers were S. Mikhailov and V. Pochitalov. From 1946 he studied at the Surikov Art Institute in Moscow under A. Osmerkin.

During the 1950's he created some of the most famous propaganda posters of that period. He used a new approach to posters. Instead of the usual method of drafting the poster in pencil and watercolour, he made sketches and complete paintings in oil on canvas, which he then transferred to the poster media. This approach gave a certain "oil painting" touch to his posters, easily distinguishing them from those of other artists.

From the late 1950's he concentrated on working with oil, at the same time departing with the rigid schemes of Socialist Realism. His style at this point became very personal, and he developed his own expressionistic appoach, using bright colours and powerful brush strokes. He expresses his almost childish happiness with what he sees.

Thematically, he painted a large amount of portraits, including many of his fellow artists. These genre portraits sometimes turn even friendly grotesque. Another favourite topic was the Russian landscape, usually from his dacha near Moscow. His series from the Baltic Sea of the late 1960's shows his fascination with the skies and the colours of the North.
BACK Share