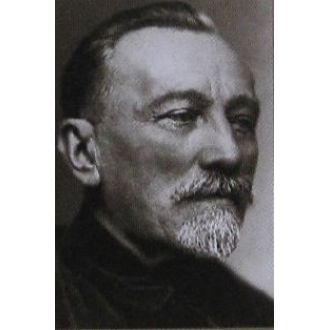 Viktor Andreevich Simov was a Russian painter, designer and and theatre set designer who pioneered the use of naturalistic settings.

After graduating from the Moscow Institute of Painting, Sculpture, and Architecture in 1882, Simov worked as an artist and architect. He designed sets for Savva Mamontov's private opera and ballet company, and for the Society for Art and Literature, before joining the Moscow Art Theatre at its inception in 1898. He remained chief designer until 1912, when he joined the Svobodny (Free) Theatre set up by Konstantin Mardzhanov, but returned to MAT in 1925 and remained until his death.

Simov was responsible for the designs of many key MKhAT productions such as Aleksei Tolstoy's Tsar Fyodor Ioannovich (1898) and the four groundbreaking Chekhov productions (1898–1904). Working closely with Stanislavsky, he initiated the practice of field research, visiting a Moscow doss-house for Gorky's The Lower Depths (1902) and Rome for Julius Caesar (1903). Simov brought three-dimensional realism and historical and location accuracy to Russian stage design, contributing much to the MKhAT reputation for authenticity.