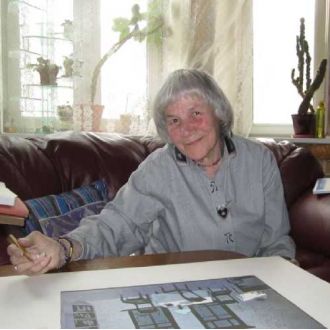 Tatyana Dmitrievna Kovrigina was born in Moscow. She studied at the Moscow Textile Institute from 1957-1962 under the professors F. Antonov and V. Pochitalov. In the 1960s, she worked as a colourist in textile designs.

From the end of the 1960s, and through the 1970s her official career was mainly in book illustration and illustrations to childrens books and fairy-tales In addition, she produced a large number of lithographs and linocuts that were printed by different publishing houses in limited editions for the consumer market.

In the late 1960s and early 1970s her personal works are inspired of the style of the non-conformists - who were also among her close friends during those years. The inspiration is demonstrated in her powerful red and black mono-types from that period. Thematically, her personal art up to the late 1980s focuses the Russian village and Russian provincial towns, Leningrad and Moscow cityscapes, The Russian South, Armenia, as well as still lives. Her favourite media are lithography, linocuts, and etching, as well as pastels and temperas.

From the late 1980s Tatyana changed her style, and she moved into semi-abstract and abstract art, based on the shapes of nature - still applying her favourite media of etching (often with aquatint and watercolour) and colour lithography.

Tatyana Dmitrievna’s career and works are bright and unique examples the artistic freedom that many former students of the Moscow Textile Institute were able to take advantage of. They were not educated, and consequently not artistically limited, by the dogmas of the Socialist Realism. However, Tatyana Kovrigina never declared herself a non-conformist - she focuses on the art itself and not the politics surrounding it.

Tatyana Dmitrievna is still actively producing her art in Moscow.
BACK Share