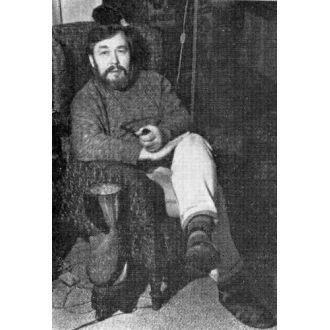 Vladimir Filippovich Zhabsky was born in the town of Prokopevskoe in the Kemerovsky oblast. He started his art career at the Sverdlov art school, which he finished in 1958. From 1961-1969 he studied at the Surikov Institute in Moscow under the professors Boris Uspensky and Oleg Savostyuk.

He started as a book illustrator in Sverdlovsk, working for the local Soviet publishing house, for Voenizdat, and for Detskaya Literatura. During that period, he illustrated more than 30 books.

After graduating from the Surikov Institute, he focused on the creation of posters, both political and social. He was one of the key members of the so-called “Agitplakat” collective, a group of artists issuing posters in parallel to the official censorship.

During the 1960s and 1970s he traveled extensively in the Urals, Chukotka, Kerch and other places in the south. These travels he documented in a gouaches and lithographs in his characteristic impressionistic style, with a wonderful light, and an easy pen-stroke.

From the late 1960s he started to work more in oil, focusing on the classical Russian landscape, depicting the old Russian village, and landscapes with cows and horses. Most of his oils from this period are painted in open air.
BACK Share