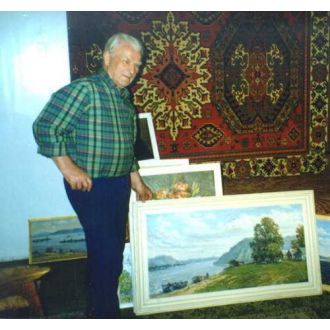 Vasilii Filippovich Eryomin was born in the village of Serednikovo, about 150 km from Moscow. His father was a farmer, who liked drawing and wood-carving, and from him the young Vasily inherited his passion for drawing.

In 1932 he moved to Moscow to live with relatives. There he learnt drawing and painting at different art studios. He was drafted for the WW2, and was among the first Soviet soldiers to arrive at Berlin.

After the war, he worked for Mosoblkhudozhnik, where his mentor was the famous landscape painter Pavel Radimov. In 1951 he was sent to Kuibishev (now Samara), to work as the head artist for the group of artists depicting the 4-year construction of the huge Volga water power-station there. During this period he got married, and decided to stay in the neighbouring city of Stavropol (Togliatti).

Eryomin is a classical representative of the Russian school of landscape painting. His major works depict the Volga and the surrounding landscapes, in soft colours, passing on to the viewer a distinct impression of the Volga expanses. During the 1950s he painted several series of watercolours, his so-called "Tours of the Volga".

Vasilii Filippovich was touched by the destiny of the old Stavropol-na-Volge, which disappeared under water once the dam was constructed. In the last year before the flooding, he painted the town in many versions, to capture the disappearing world of the Russian Village.
BACK Share