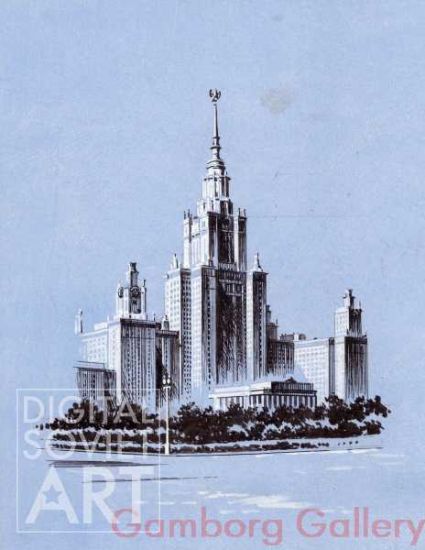 One of the seven high-rise Stalinist era buidings that became a landmark of Moscow. The Lomonosov University (1947-1952), built by a collective of architects under the leadership of Rev Rudnyev on the Lenin Hills.
This is the highest point within the metropolitan area of Moscow - creates a visual axis along the Moscow River to the Kremlin. The centerpiece of the building is a 240-meter high tower sorrounded by various supporting structures. The complex was conceived on a strict axial plan and rises in a series of steps to the main vertical volume. The crowning structures on the towers are decorated with neoclassical motifs and sculptures of the heroes of Socialism. Acclaimed officially for its vertical composition, it can be seen nowadays as an example of the stonelike rigidity of the totalitarian Stalinist regime.